Charles F. Maurer was instrumental in establishing the Pioneers

According to an article appearing in the June 23, 1936 Douglas Enterprise, it was Charles Maurer who called the meeting that resulted in the very formation of the Wyoming Pioneer Association. Maurer, a Douglas attorney who worked in banking and real estate, later became the Wyoming Pioneer’s third president.

“During the first years of the Wyoming State Fair in Douglas the pioneers were allowed a time for a meeting and on several occasions group pictures were taken, some of which adorn the walls of the present pioneer cabin,” reads the 1936 newspaper recounting the early years of the Wyoming Pioneer Association.

“Early in December, 1925, Charles F. Maurer, a Converse County pioneer,” says the newspaper, “conceived the idea of incorporating the pioneers into an association for the purpose of preserving pioneer relics and history. He called a meeting for December 18, 1925, at the City Hall in Douglas with the following present: W.B. Hardenbrook, C.W. Horr, C.F. Maurer, M.D. Newsom, Thomas F. Doyle, and L.C. Bishop.”

During a follow-up meeting on December 26, 1926, the Wyoming Pioneer Association received its name and by-laws were adopted. A board of directors was appointed and during a January 13, 1926 meeting, John Hunton was elected as the group’s first president. C.F. Maurer served as vice president during that first term of officers.

Maurer was also a leader in the Douglas community, arriving in town in 1886, two years after he graduated from law school in Iowa. He’s credited with seeing a Carnegie Library built in Douglas (no longer standing), and he served as President of the Good Roads Club. He was a director at First National Bank, served on the school board for 21 years, and acted as the local representative for the Pioneer Townsite Company. Maurer’s historic home was located near Fourth and Walnut streets in Douglas, but in 1976 was moved for 409 S. Seventh Street.

When Bill Barlow’s Budget was celebrating its 21st anniversary in 1907, Maurer was heralded as one of the Douglas community’s champions and founding fathers. “….Charley Maurer was the original Douglas booster, and that from the very first day he never lagged in the work – that he has never been found lacking in either push or public spirit, and that many of our public improvements and much of our present municipal attainment is due to the indominable energy and persistent force of example.” 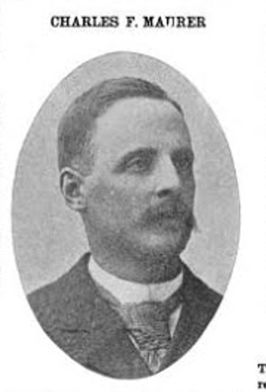